They call the place Sissinghurst Castle Garden, but it is really not a castle.

The garden is very famous though. 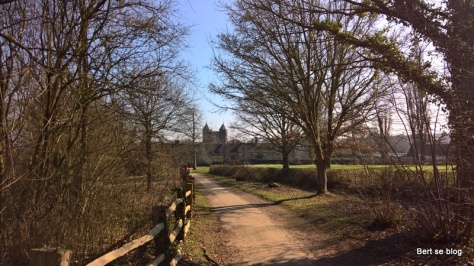 Last winter they opened the winter garden to visitors for the first time and I was there.

On a lovely bright February day.

Vita Sackville-West was the lady of the house and the chief gardener. She and her husband bought the place, I think there was some sad story of her growing up at a mansion not too far away and being unable to inherit it.

She fell in love with the tower on this property. This is the view from up there. 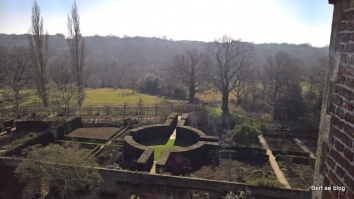 You can see the hop kilns

The view form the other side of the arched entrance, 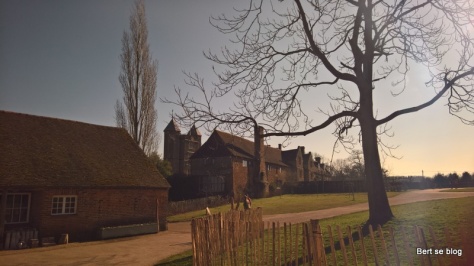 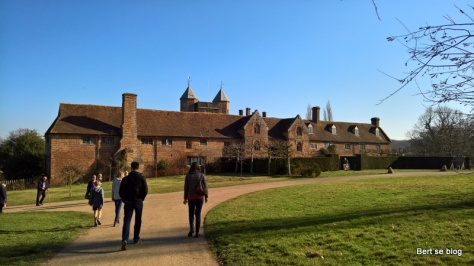 over the pond to the main buildings

and the tower as seen from the garden. 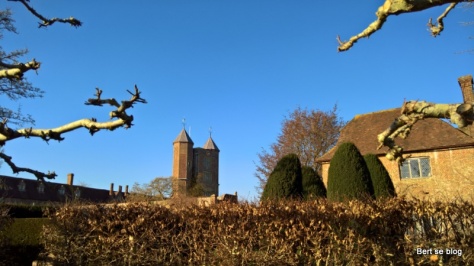 In February you can see the snowdrops, the crocus flowers and the bare rose stems.

They say if you bend the roses they flower profusely. You can do this with all roses except the hybrid teas. Think I should come back in summer!

Do you think we can pick saffron?

The garden is famous for Vita’s new style of planting, but don’t overlook the structural design.

They say she was never in the garden without at least a string of pearls.

The main living quaters as seen from the courtyard.

And the tower in all its glory. It does seem like an ideal place to write, which is what she wanted it for.

Think I remember they lived here for years in a ruin so they could renovate. All for the tower and the garden.

Well if she had her way and stayed in her childhood home, she would never have created this beautiful place and garden.

Our guide wasn’t sure of the name of this plant but assured us it had been flowering for weeks. Protected there in the corner.

If I’m right it is the camelia japonica, or the Japanese camelia, cousin to the tea plant – camelia sinensis, from China.

It seems as if I am in the south of Germany here sometimes, although in reality it is Namibia, on the south western point of Africa.

There are so many Germans here in Swakopmund you get confused.

I’ll do a small post about last summer in Germany.

We start in Cologne, a highly industrialized city that survives since before Roman times, was mostly flattened in WWII, put still has their cathedral.

They have quite a vibrant shopping scene today.

From my window, on the 22 floor, you could follow the chimneys on the horizon. 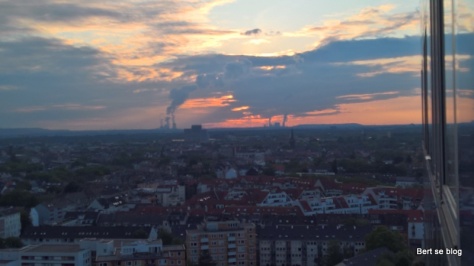 The poor cathedral is really suffering with all the air pollution. 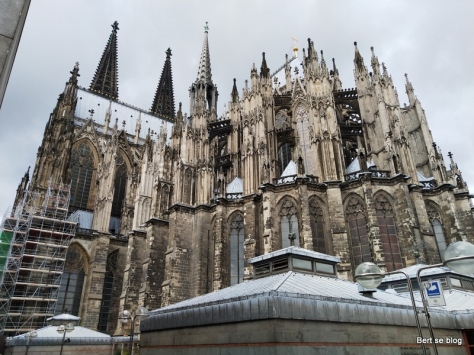 The spiel is that building works extended over 700 years, but if you listen carefully, it sounds like it was suspended for over three hundred years, somewhere in the middle. Because of wars I take it.

I wasn’t overwhelmed by their cleaning effort, to be honest. At this rate they will never get it done, and the overall effect is really just to make the dirty bits look dirtier.

Also they seem to have enough going on inside. Nifty spider thingy they have there. 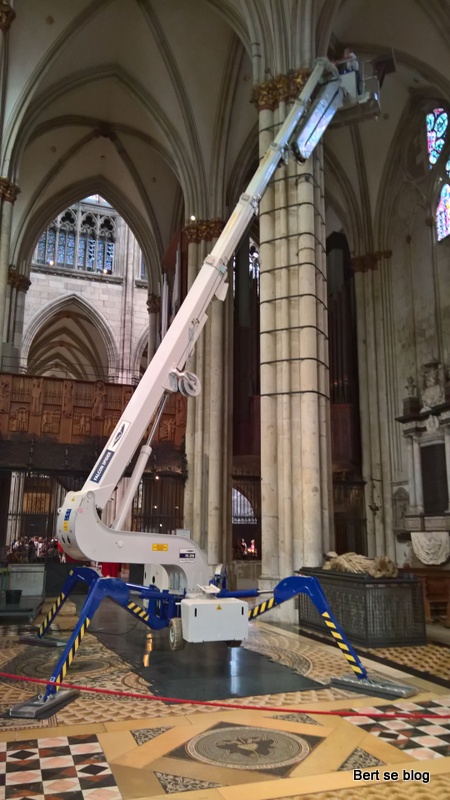 I suppose if they don’t clean the outside, the dirt will eventually work its way inside and you will be left with a mosaic floor with a ribbon around it, like you have on the old Roman archeological sites.

Impressive mosaic though, assume made with marble etc and not tiles.

Here is a little combination from the summer gardens on my side of the city.

They seem to be doing well despite the air pollution.

I was in the red and blue block you can see  above the honey sign. It won the award for the ugliest building of the year 😦

Can’t fault the view though.

Trees on my way to the shop

Had to go past the tennis courts, along the mosque and across the street.

Suppose you need workers in all those industries.

I found the people of Cologne gentle and kind, which makes sense for a city with one of Europe’s oldest universities.

Also quite gels with their signature scent, the 4 7 11, soft and unpretentious, if a little aged 🙂

The old city over the Rhine

and a little closer up

This guy seems to have his own built in pigeon, very efficient.

Quite a good museum about their Roman history, which I didn’t visit.

A lot of transport still goes on the water here. Think this is an oil tanker.

They are the biggest Rhine city today.

And this poor bugger is the face of STD’s in Germany.

I certainly hope he lives far away, it would be a bit upsetting to see him on the S bahn.

Looks a bit upset himself, but who can blame him?

Try chopping some  paprika or peppers and sweetcorn into your coleslaw 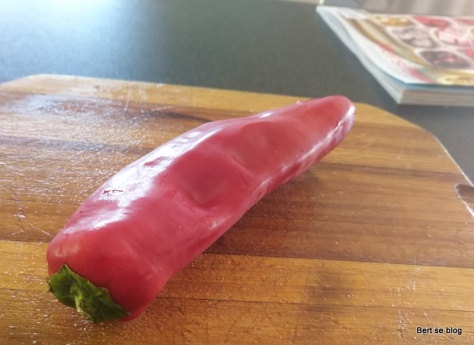 It’s not flashy, but it didn’t turn out half bad 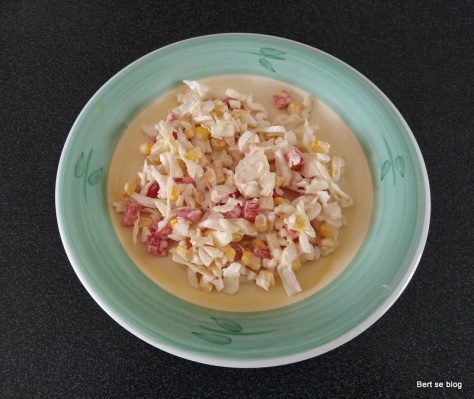 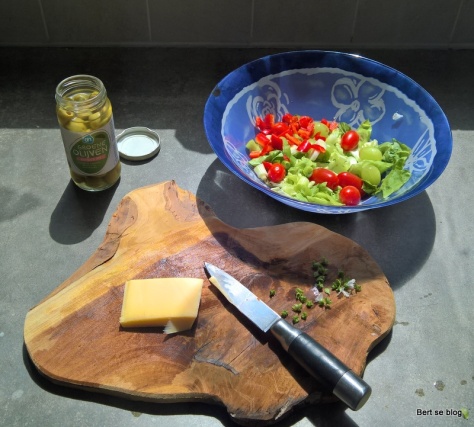 Mix together with the tomatoes, grapes and green olives

Dish up. I had ice tea, but then I always have ice tea. 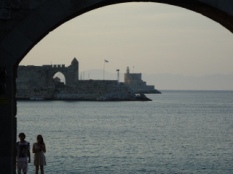 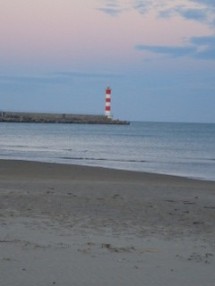 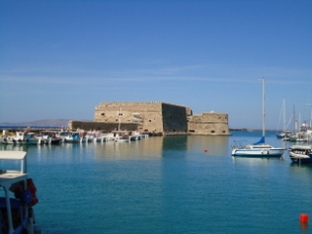 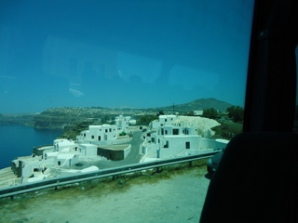